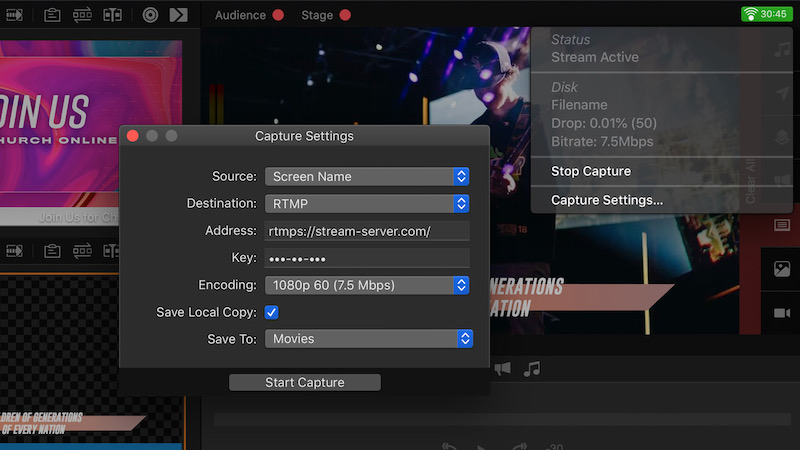 “We had already planned to add live streaming to ProPresenter 7 at some point in the future, allowing users to easily reach online and mobile audiences without the need for a separate encoder,” said Brad Weston, president, Renewed Vision. “However, with the current state of the world making streaming more important than ever before, we adapted our roadmap to quickly help our customers meet this increasing demand. Our overarching vision is to evolve ProPresenter into an all-in-one production, presentation and streaming studio, so rather than serving as a playout and graphics source for other production tools in the chain, it becomes the only tool that customers need. The new features in 7.1 are a significant step in that direction.”

ProPresenter 7.1 enables users to choose any one of the software’s multiple simultaneous output screens and stream it live using the RTMP protocol, record it to disk, or do both concurrently. The live stream can be output directly to a social media platform, CDN, dedicated streaming platform or private server for audience consumption. Users can record or stream an existing, locally-displayed screen or craft an additional ProPresenter screen tailored specifically for streaming with a logo bug, additional branding and more.

Version 7.1 also brings file-based recording to ProPresenter 7. The selected screen can be recorded to disk with a choice of compression formats including Apple ProRes, H.264, HEVC (H.265) and HAP, subject to codec availability on the user’s host system. The screen’s alpha channel is preserved when recording to a compatible format such as ProRes.

“We designed the live streaming feature to be really easy and approachable for novice users who don’t have a lot of streaming experience,” said Justin Tyre, product leader at Renewed Vision. “It lets them take all the things ProPresenter shows everywhere else, and stream them online. The recording feature also supports an increased need for post production during the pandemic for customers such as churches, where musical performances may be recorded at a different time and location than the sermon itself and then edited together.”

“We launched ProPresenter+ as a means to continually add significant value to our customers’ investment as quickly as possible,” added Weston. “The new streaming and recoding functionality in ProPresenter 7.1 is a great example of this endeavour.”