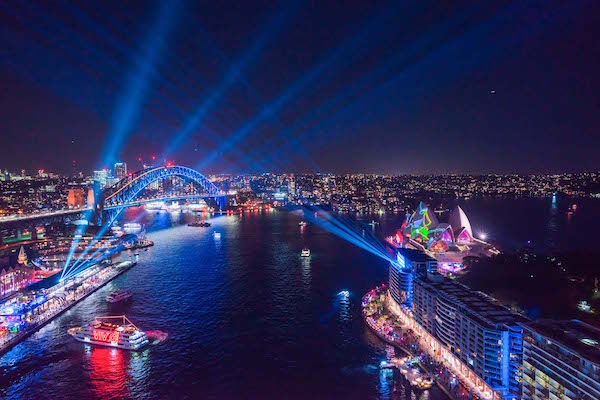 “This year, visitors to Vivid Sydney can expect even brighter, clearer, better-defined projection from TDC,” said Pete Lynn, Head of Creative Projection at TDC. “Our projection design incorporates the same technology as that used by the world’s leading events and arena shows for example — Cirque du Soleil. That’s a big part of our success.”

“TDC Live View feedback systems are deployed everywhere, allowing real time monitoring,” continued Alex Rendell, Technical Projects Manager at TDC. “Projections were finalised mostly in the pre-production phase, so everything is built before we turn up on site – which reduces down time,” said Lynn.

“TDC has been a supporter of Vivid Sydney for many years,” added Michael Hassett, Founder and Managing Director of TDC. “Our technical experts have been behind the scenes bringing the stunning light projections to life, setting new standards in projection technology and mapping design.”

The centrepiece of Vivid Sydney 2018 is Metamathemagical, which sees celebrated Australian artist Jonathan Zawada commemorate Vivid Sydney’s tenth anniversary with the creation of a site-specific artwork that transforms the world-renowned Sydney Opera House sails into a series of kinetic digital sculptures.

Laser-projected images are delivered onto the 9000sqm sails for the first time, thanks to TDC’s investment in the latest projection technology. These are brighter, capable of more uniform and better controlled light output for a crisper image. The projectors feature 4K/UltraHD resolution; that’s four times the number of pixels of HD, and means that they deliver 138,240,000 pixels to the sails — equivalent to four IMAX screens — with startling clarity and colour fidelity.

“In creating the Sydney Opera House projections project, a 3D model was constructed and by using a disguise media server we were able to visualise the content playback with the animators in the preproduction phase,” said Steve Cain, Head Engineer & Media Server Specialist at TDC. “This is the world’s best media server and calibration technology and it is so reliable and robust. I used a collection of features that disguise media servers offer, such as Texture Masking, Deformation Layers, Projector Calibration and Colour Shift options. Also the real time work flow let me sit with the Jonathan Zawada and colour grade the content live on the sails of the Sydney Opera House. We also used the Multi Editor feature, to allow a couple of us to line up the building simultaneously reducing the projector line up time to just a few hours.”

“This year, we designed a new outdoor projector housing solution that was resistant to high winds, and that could operate reliably close to salt water and at low temperatures,” explained Anthony Pellizzari, Technical Projects Manager at TDC.

Another highlight of the event is Snugglepot and Cuddlepie at Sydney’s Customs House, which uses projection provided by TDC to showcase the adventures of two characters with whom Australian children have been growing up with since author May Gibbs created them a century ago. Ample Projects adapted the amazing visuals.

Photonic State at Government House presented a new challenge for TDC because it required multiple projector positions. The architecture of the building, with its large towers, also makes significant technical demands.

“Early on in the project, we undertook a projection study and 3D model so that the show could be created in the 3D world,” said Lynn. “The model was then worked on by students from training and vocational education provider, TAFE NSW.”

TDC GOES ALL OUT AT VIVID SYDNEY