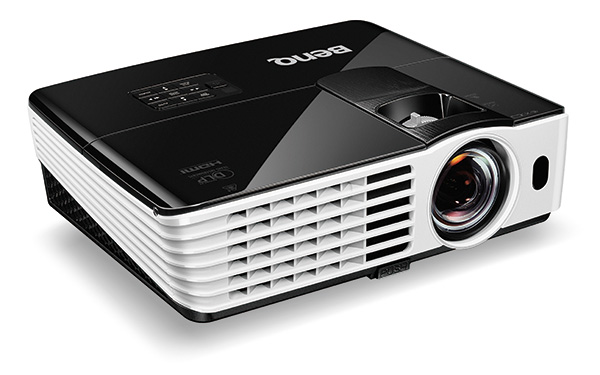 There are many criteria to be considered in choosing a projector for presentations: brightness, flexibility, resolution, connectivity, and special features, amongst others. But one that should always be high on the list is range. How close do you want the projector to be to the screen?

This doesn’t matter much for a ceiling-mounted projector in most venues. But for desk- or trolley-mounted ones, a long-throw projector is generally going to have trouble with human bodies getting in the way.

The BenQ TH682ST is more conventional than that. It uses a bulbous lens to make a big picture from a relatively close projector position.

The BenQ TH682ST looks conventional in design: lens at the front, a small set of press-button controls on top, along with the lens controls, and inputs at the back. The body is finished in a rakish black and white.

There’s a single HDMI input to handle digital video, supplemented by a standard analogue computer input. This can be configured to support component video rather than RGB if required. There’s also composite video and S-Video. And audio in and out.

In addition to a compact remote, the projector comes with a soft carry bag and a VGA cable.

To fill a 100-inch diagonal screen, the projector needs to be located between 1.522 and 1.674 metres away from the surface. As those figures suggest, the zoom range is limited (1.1:1). There is no lens shift. The image is projected upwards, so that the bottom edge is slightly above the centre of the lens – 28mm in the case of the 100-inch projection.

While there are adjustable legs to allow the projector to be canted if required to get the image onto a fixed screen, and keystone adjustment to correct the consequently distorted picture, this will of course waste picture resolution and reduce the crispness of displayed text. That said, the projector actually did a decent job of rescaling with keystone, keeping text and graphics reasonably clean.

I found that once I’d gotten the projector positioned to the correct height, aligning the picture with the screen was easy. The focus ring and zoom control are inset somewhat into the top of the unit, were easy to reach and operated smoothly. When I first focused the projector, my attention was on the centre of the screen. This left the focus slightly off in the top left hand corner. Some careful nudging of the focus ring correct this without noticeably losing sharpness at the centre.

The scaling of this projector was first class when I initially fed it with a 1366 x 768 signal from a notebook. But of course I mostly fed it 1920 x 1080 from both Windows and a Mac.

Even under bright room lights (two 36W fluorescent tubes a couple of metres away) a computer or presentation image was clear, readable and with reasonable colours. Only fine graduations of detail at the dark end of the scale were lost. Just a minimal amount of dimming brought out that as well. With a room well darkened the black levels were very satisfactory — even in home theatre terms, let alone for presentations. In general, the Smart Eco lamp mode (more on this below) was fine for brightness.

If you want to show the odd movie with the projector, you’ll generally find it satisfactory. It lacks some of the nifty features of a home theatre projector, such as motion smoothing. You may find the odd section of movie judder — in which the picture seems to jump visibly in a rapid series of steps — during some poorly shot scenes. Because DLP projectors switch so quickly between frames, there’s no time-smearing to paper over this.

To my eyes the brightness of the picture seemed nicely uniform over the entire screen. Instruments told a different story: top centre was around 73% of the brightness of bottom centre. I think our eyes perceive brightness on some logarithmic scale, so this was simply not obvious.

The projector includes a number of potentially useful aids to users. There are three ‘Teaching Templates’. ‘Letter Formation’ evokes memories of primary school, with horizontal dotted and unbroken lines to guide formal handwriting. ‘Worksheet’ is simply 16 horizontal lines, while the ‘Coordinate Chart’ presents an X/Y axis. These are available as both white on black and black on white. Clearly these are all going to work a lot better with a rear projection system.

Caution should be exercised with the ‘blackboard’ look. While the unit delivered just about no DLP ‘rainbow effect’ with normal use, the narrow white lines on a black background proved to be an exception, and a minority of the population finds the rainbow effect quite disconcerting.

There’s also a convenient digital zoom of up to 200%, with +/- keys on the remote. You can arrow the display area around to find the section of the picture of interest.

A ‘Presentation timer’ is provided. You can set where this goes on the screen, whether it counts down or up. You can even have it beep (with a 30-second warning) at the end of the time.

The unit has a very small built-in speaker — perhaps 50mm in diameter as far as I could see peering in through the front grille. Yes, the front. Projecting the sound forwards seems odd in a projector designed to sit in front of the people watching the presentation. Nonetheless, while fairly thin, the volume was sufficient for coherent sound for small groups in a quiet venue. In most cases though the addition of just about any powered speakers would greatly improve performance.

The USB connection allows the projector to communicate with a computer, delivering ‘page’ commands to its presentation software. Page up/down keys on the remote allow the presenter to wander around instead of sticking near the computer.

There are three lamp modes. ‘Normal’ is full on — and is rated to deliver a lamp life of 4000 hours. ‘Economic’ is a low power mode that extends the lamp to 6000 hours. ‘Smart Eco’ adjusts brightness according to the picture content (not according to ambient light). The lamp is rated at 8000 hours at this setting.

The specifications say the projector uses a maximum of 320 Watts. My power meter never went above 244 Watts. That was in ‘Normal’ mode. For the most part with computer content ‘Smart Eco’ used pretty much the same as ‘Normal’ mode. With video content it varied quite a bit. Projecting an image which consisted of a full black screen it fell away to 178 Watts. There’s a ‘Blank’ key on the remote which blanks out the screen, and this reduced the total power consumption to around 94 Watts.

The non-smart ‘Economic’ mode consumed a steady 202 Watts. The brightness was around three quarters of the ‘Normal’ mode.

Given all these variables, it’s a bit hard to work out running costs. As I write, a replacement lamp costs $225, but I’m told by BenQ there will be a significant (and imminent) price drop in the cost of projector globes. This will include this projector’s lamp falling to AU$195 (inc. GST).

So worst case, in normal mode, assuming electricity costs 20 cents/kWh, this projector would cost around 9.8 cents per hour. Half would be lamp replacement, half energy costs.

According to my power meter (which isn’t very accurate at low consumption), the projector consumed about 0.3 to 0.4 Watts in standby mode. BenQ specifies less than 0.5 watts.

Starting up, the projector produced its splash screen in about a dozen seconds, with the input picture being locked onto and displayed in 21 seconds. It was far from full brightness at that point, another minute or two should be allowed to let the picture stabilise.

After running the projector at full brightness for a few hours on a moderately warm day, it took about 102 seconds for the cooling fan to switch off after putting the projector into standby. Obviously you need to wait that long before unplugging the power and packing up. You will know when the fan has gone off because of the startling double-beep the projector emits when it does so.

The BenQ TH682ST projector turns out to be a good, bright, and low cost — both to purchase and to run — for those who want a desktop projector which can be placed reasonably close to the projection screen. 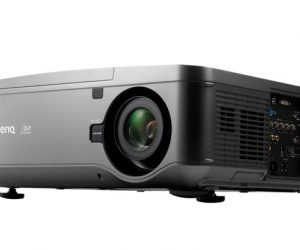 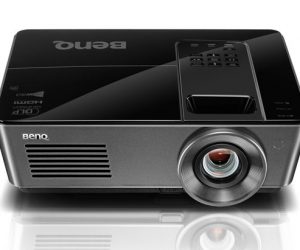 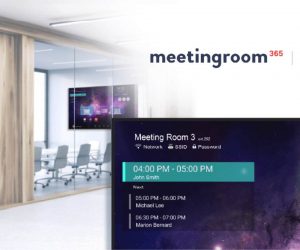 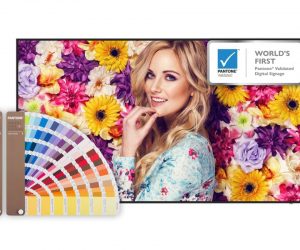 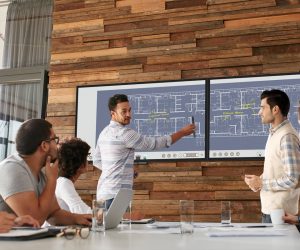 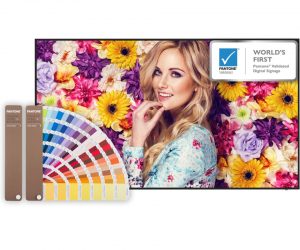 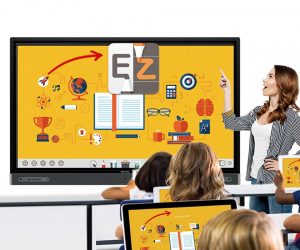 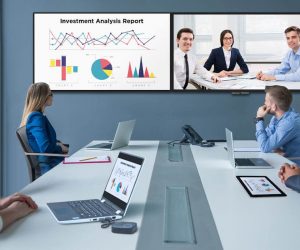 BenQ Gives Zoom Its Close Up 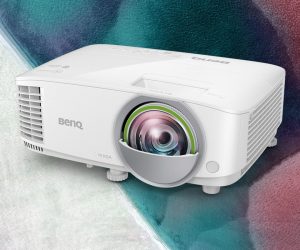 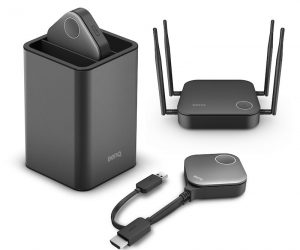 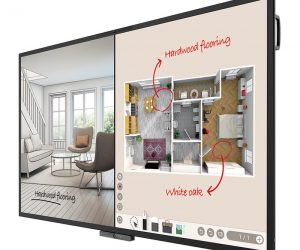 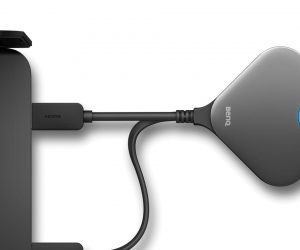